On 18 March in Kyiv Liudmyla Rabchynska, Deputy Minister of Digital Transformation and Vyacheslav Nehoda, Deputy Minister for Development of Communities and Territories of Ukraine, together with Tobias Thyberg, Ambassador Extraordinary and Plenipotentiary of the Kingdom of Sweden to Ukraine and Xavier Camus, Head of Operations Section 1 “Good Governance and Rule of Law” at the Delegation of the European Union to Ukraine, handed over to hromada heads the keys to four mobile ASCs.

“Within the U-LEAD with Europe, the joint effort of the EU, the government and hromadas of Ukraine, Sweden is responsible for the support to establishment of 484 well-functioning Administrative Service Centres all over Ukraine. These centres, their remote workplaces, territorial units and mobile offices will constitute more than 1300 access points to high quality public services for more than 11,9 million residents of hromadas across the country,” Tobias Thyberg, Ambassador of Sweden to Ukraine, said.

Mobile ASCs, created with the support from U-LEAD with Europe Programme, will provide administrative services to more than 125,000 residents of four hromadas: Nemyriv hromada in Vinnytsia Oblast, Pidvolochysk hromada in Ternopil Oblast, Lozova hromada in Kharkiv Oblast, and Markivka hromada in Luhansk Oblast.

“The EU supports and will continue supporting the Decentralisation reform that has been successfully carried out in Ukraine. The U-LEAD with Europe Programme funded by European Union and its Member States Denmark, Estonia, Germany, Poland, Slovenia and Sweden supports the reform through establishment of accountable and well-functioning administrative service centers in Ukrainian newly amalgamated communities. The mobile centers make services accessible to vulnerable categories of residents living in remote settlements, the elderly, and people with disabilities. We are very glad that U-LEAD with Europe contributes to making their quality of life better and to help Ukrainian hromadas grow,” highlighted Xavier Camus, Head of Operations Section 1 “Good Governance and Rule of Law”, the Delegation of the European Union to Ukraine.

A mobile administrative service center is a special equipped vehicle to accommodate two administrators and three visitors; it operates as a regular ASC office, and provides services in a one-stop shop format to those who cannot receive services at the main ASC office or online. The “ASC on wheels'' also has a mobile suitcase to deliver services at home. Mobile ASCs are equipped with a ramp, heating and air conditioning system, video surveillance cameras, office equipment and a POS terminal.

Liudmyla Rabchynska, Deputy Minister of Digital Transformation of Ukraine, also joined the presentation of mobile ASCs. She said: “We work to ensure that everyone has access to quality public services. Regardless of where they live - in a city with millions of residents or a small hromada with a population of up to 10 thousand people. We are very grateful to U-LEAD with Europe Programme, which supports not only establishment and modernization of stationary ASCs but also mobile offices, which will make services even closer and more accessible for citizens across Ukraine.”

U-LEAD with Europe launched mobile ASCs in partnership with hromadas. All personnel of mobile ASCs and the staff of main ASC offices passed training under U-LEAD’s training program. To properly park mobile ASCs, hromadas provided a garage and purchased computer equipment for the mobile office.

Vyacheslav Nehoda, Deputy Minister for Development of Communities and Territories of Ukraine, congratulated the communities and added: “We are going through an important phase of decentralization reform – the first year after creating new hromadas, and therefore, during this period of transformation it is extremely important to preserve and improve the access to administrative services for hromada residents. Mobile ASCs will help deliver services even in remote localities, and I hope that hromadas will take advantage of this opportunity and facilitate delivery of affordable, quality services from the government to their residents.”

“With the support from the EU-funded U-LEAD with Europe Programme, 11 mobile administrative service centers providing services to over 300,000 residents in the hromadas’ most remote localities became operational in Ukrainian hromadas. We hope that these ASCs will indeed make the services more accessible and help hromadas deliver quality services to their residents even in the difficult time of quarantine-related restrictions,” Susanna Dellans, Sida (Swedish International Development Cooperation Agency) Programme Director of U-LEAD with Europe, summarized. 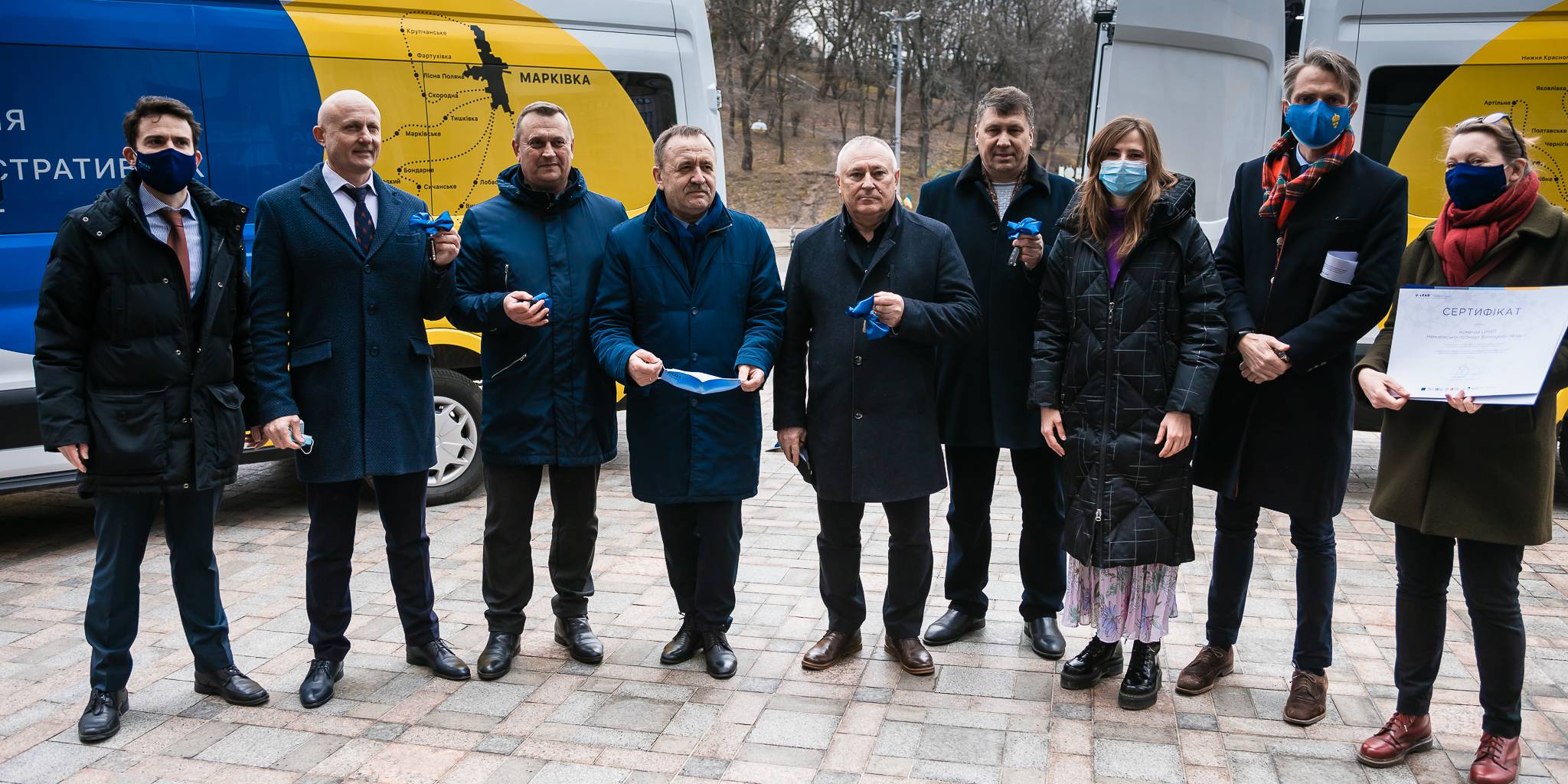